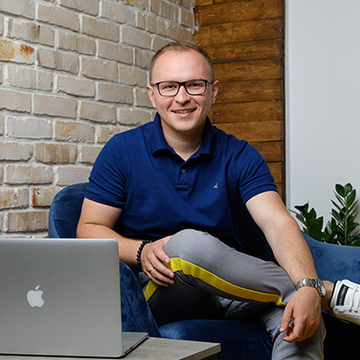 About achievements in numbers:

Founder and ideological leader of the SEO Academy.

Entrepreneur, owner 8 working businesses, creator and speaker of training courses at SEO Academy. Almost all his conscious life is engaged in SEO-promotion.

In 2004 carried away by developing sites and registered the first domain for his web studio. Later, customers began to contact not only to create sites, but also to promote them. At that time, there were no textbooks, no blogs, or courses about SEO. Therefore, Paul, testing different things, built your universal algorithm, which allowed to display customer sites of any subject and region promotion in TOP-10.

Seeing the results of his clients, Paul decided to try something of his own. In 2009, he created his own online sports food store, promoted it to TOP and after some time sold it as a finished business. In 2011, he began selling sunglasses and continues this business to this day. He promoted each of his projects using a refined algorithm, and received customers almost for free.

Paul always tried to do more than expected. And that was the motto of life. He was approached by more and more entrepreneurs who wanted to develop their business. There were more and more clients, and at some point Paul realized that he simply could not physically take everyone for promotion. It gave a boost in development of a new direction.

In 2015 founded educational project SEO Academy. He packed all his knowledge and experience in a more compact period of time. And now every entrepreneur can get them and independently implement them on his project.

Publications of Pavel Shulga on other sites: